We’ve had a good look at the final edition of Firefox 3 which is released today. In this review, Cyril and Nick chat about the various changes and improvements, and discuss just how good the new version is.

Cyril: Let’s start out with the interface. Now based on the Gecko 1.9 rendering platform, Firefox 3 has undergone a significant makeover, with sleeker icons and a cleaner look. In some ways I’d say it looks a little more like Flock, which is not my favorite browser but has an attractive design. The ‘Go back one page’ button is bigger and elements in the location bar, like title and url, are more easily recognizable. A native Vista look is available for users of Microsoft’s latest operating system. One of the things that impressed me most though is that version 3, finally passes the Acid2 Test, so you can be guaranteed to render any web page out there.

Nick: There’s no doubt that Mozilla have improved on the look of Firefox 2 although I never had any major aesthetic issues with the former anyway – it’s always been a million times better than Internet Explorer and that’s all I cared about. I can see what you mean about Flock although as I argued a while back, that’s no bad thing in my book as I quite like the browser. As you say, while Vista users can now enjoy a native look, I think Mac owners have more to get excited about. The default theme for Mac now looks a lot more like Safari in Leopard with a cleaner interface and Safari style icons.

C: Yeah, I also quite like the updated interface on Mac. I don’t know what to think of Places, the new system for managing bookmarks and history, though. I like being able to bookmark any page just by adding a star in the address bar or how the browser lets you search both your history and bookmarks just by typing in the address bar. Tags are also a welcome addition, although I wonder if that many people will make use of them. I’m also glad that you can now properly save sessions, although it’s a bit annoying how Firefox asks you every time you close the browser. 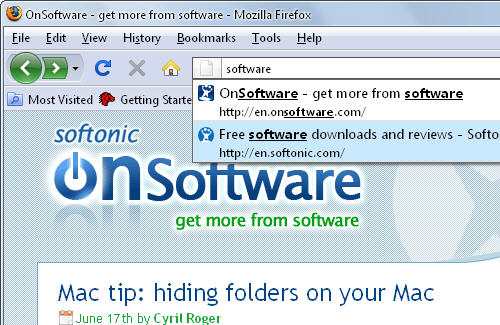 Places itself comes as a folder in your toolbar and includes all sorts of advanced lists like recently starred, most visited starred or most used tags. I do think that’s a little too much information given to users though. I would have preferred being able to create my own smart bookmark folders.

N: For me this is the biggest new innovation in Firefox 3.0. The bookmarking system was never particularly intuitive in the last version and I’ve currently got a massive list of random uncategorized bookmarks because organizing them was always such a long-winded process. Starring pages from the location bar and adding tags has made the whole operation much quicker. However, I have noticed that just as in previous versions of Firefox, if you try to drag a huge number of bookmarks into another folder, sometimes nothing happens or worse, Firefox crashes. I’d really like to see this issue cleared up once and for all by Mozilla. 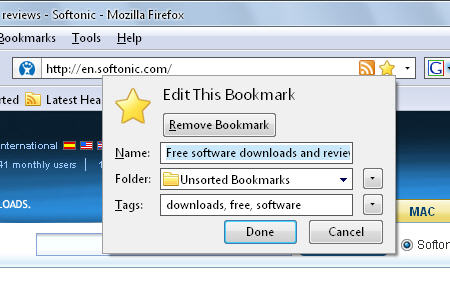 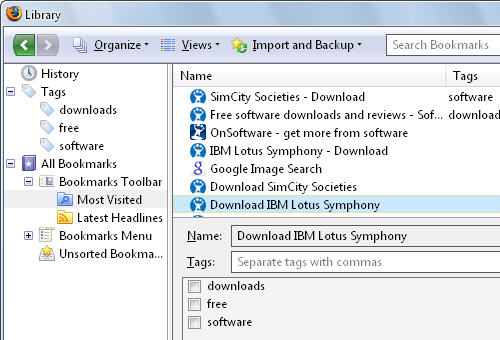 N: I wasn’t as impressed by these features as the ones we just mentioned. I use Foxmarks anyway to synchronise my bookmarks so I’ve effectively always got them backed up on the Foxmarks server. I would have been much more pleased if Mozilla had incorporated this kind of feature in Firefox 3.0 by default although installing the add-on is no big deal. However, I do like having the recently bookmarked and tag fields because again, it makes bookmarking much quicker.

C: What do you think of the new add-ons manager? It’s good that you don’t have to restart it to make use of new add-ons anymore and that Firefox automatically checks for updates to the ones installed. The manager also has a built-in search box from where you can look for and install new add-ons. The problem is that, as we speak, most of the current add-ons aren’t yet supported by version 3. Hopefully we shouldn’t wait too long for them to get updated.

N: It was really annoying to have to restart Firefox every time an add-on was updated so that’s a definite improvement. However, in my experience the add-ons themselves checked for updates automatically so auto-updates are no major innovation. The search box is useful although I would like to have seen something that directly linked to the latest top 3 or 5 add-ons being downloaded.

C: Maybe that’s too much to ask. The manager already brings up recommended add-ons for you, which you can install immediately or read more about on the Mozilla add-ons page. I also really enjoy the new download manager. Being able, not only, to search for downloads from the manager, but especially, to resume started downloads even after shutting down and restarting the browser is a big plus and something I’ve been looking forward to (we download a lot here at Softonic).

N: Again, I agree that this is a big improvement but I’ve always used DownThemAll! for my downloads and the new download manager is not good enough to make me want to change. For one thing, I still find Firefox’s download manager is slower and in addition, it doesn’t allow me to download multiple files as easily. 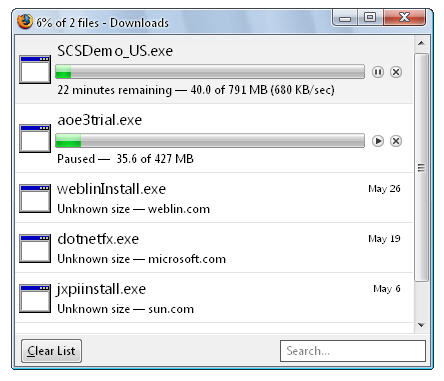 C: OK, so it’s never going to be as advanced as the best download add-on you can find for Firefox, but I think most users will enjoy it much more.

My biggest point of focus when testing this new Firefox was probably performance though. High memory usage was the real weakness in past versions of Firefox and something users constantly complained about. Working on the latest Windows XP with a 2.80 GHz chip and 2 GB of RAM, Firefox 3 did start up much faster and the browsing experience, even with many tabs opened, was smoother. Although obviously my RAM count did go up to at least 200 MB with a dozen tabs opened, including videos, normal RAM consumption (with four tabs open) was closer to 100 MB, which is acceptable.

N: Agreed, this is one of the big issues that everyone was looking out for and it seems that Mozilla have decreased the RAM usage significantly. However, I’m still not convinced that it’s going to consume so little RAM when it’s loaded with lots of new Add-ons. At the moment, this is not a major issue because many add-ons are not compatible with Firefox 3.0 but just wait a few months and I wouldn’t be surprised to see the issue resurface.

C: What about security? I’ve always trusted Firefox to be a safe browser, and version 3 carries a lot of security improvements. You can set specific permissions for every site, like blocking images or cookies and checking if you have saved password there. Although it’s a detail, I also like being able to choose what warning messages pop up. The only thing I didn’t like was the one-click site info on the left of the location bar , which never really seemed to work.

N: I have to say, I’ve never worried too much about security issues with Firefox because I’ve always felt safe. I’ve been warned occasionally by the anti-phishing feature and asked whether to accept security certificates but usually it’s been Firefox being over zealous. I can understand it’s nice to be able to select which warning messages you want to pop up but I’d rather Firefox warn me about anything suspicious anyway so I won’t be touching this feature. 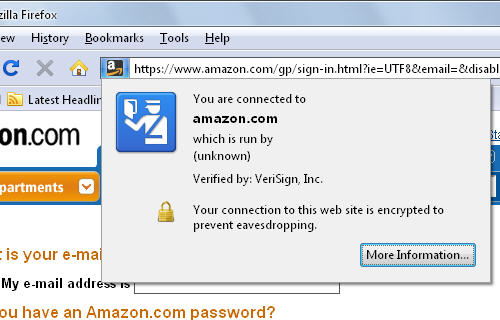 C: I guess you’ll like the new malware protection, which automatically warns you every time you reach a webpage which is not safe to browse. It’s basically the anti-phishing feature, just new and improved.

N: I’ve never actually used Windows CardSpace or Open ID so these are not features that I’m particularly bothered about. I’m not really a big fan of keeping my identity details online anyway. I think supporting EV SSL is something that you’d expect from any browser that takes security seriously now anyway. As long as it doesn’t prompt users with security warnings too much, it’s a good thing.

C: Firefox 3 is definitely a step up with better performances, a nicer design, better security and lots of work done on the little details like the download manager or bookmarking. The whole browsing experience feels better overall. I’m still not totally convinced by Places though and do think that Mozilla tried to stuff too many new features into it. In the end though, I’d encourage you to download it to see for yourself if you like the new version.

N: I agree that Firefox 3 is definitely a significant improvement on Firefox 2. At least, Mozilla haven’t “done a Microsoft” in the way Vista might have been visually better than XP but not really functionally better. The decreased resource consumption and improved bookmarking system are the big highlights for me . I still think bookmarking could be improved even further and as I mentioned, it will be interesting to see how the memory usage is when it’s loaded with add-ons but for me, Firefox 3.0 is another step in the right direction for Mozilla.