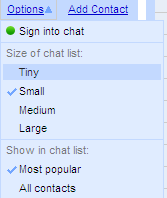 Since upgrading to Firefox 3 a few months ago, I’ve been pretty impressed by the performance of Mozilla’s latest browser. Generally, page loading times seem slightly quicker, although several of my add-ons are still not supported by it, which is something you have to unfortunately resign yourself to every time you upgrade Firefox.

However, one major problem that I was experiencing was a severe memory leak when Firefox would suddenly hog my RAM and CPU for about a minute causing the browser to hang, or even crash. Although memory leaks have been an ongoing problem with Firefox, this was far more serious and persistent that usual. The simple solution, it seems, was to sign out of the Gchat module in Gmail. Simply by being signed in, Gchat could suddenly conflict with Firefox for no apparent reason. A quick Google search revealed that I wasn’t alone either with desperate users flocking to Mozilla’s forum to find a solution.

It seems incredible that Mozilla didn’t even notice that one of the Internet’s most widely used web based e-mail clients was causing this problem when they developed Firefox 3. In fact, it’s not the only basic glitch I’ve noticed with Firefox 3. Some JavaScripts, that worked fine in Firefox 2, don’t seem to work for me in the latest version of the browser.

Let’s hope that this is not a sign of things to come with future releases of Firefox. The add-ons incompatibility issue is already annoying enough but incompatibility with basic components such as JavaScript or IM clients is not really acceptable (unless of course you’re Microsoft).

How to: Downgrade to Firefox 3