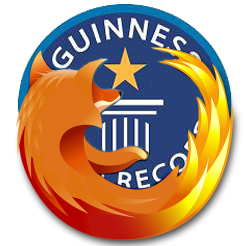 When launching the long-awaited Firefox 3, the guys over at Mozilla decided to try to achieve a Guinness World Record. The idea would work not only as a very original marketing campaign to promote the latest version of the popular browser among Internet users, but would also set Firefox 3 as the most downloaded piece of software in the world in only 24 hours.

A few weeks later, after in-depth reviews, video analysis and some opposing voices, Mozilla has made it official: Firefox 3 is now the proud holder of a Guinness World Record as the most downloaded software in 24 hours. The numbers are pretty self-explanatory:  on June 17th 2008, the day when Firefox 3 was officially launched, 8,002,530 people dowloaded it from the Mozilla servers (no wonder they were on the verge of crashing). The counter is still working on their site and currently shows more than 28 million downloads. Way to go!

Again, Mozilla wants to thank all users who helped Firefox 3 to achieve the Guinness World Record. So if you did your bit and downloaded your copy last June 17th, show off your contribution by printing your very own personalized certificate.