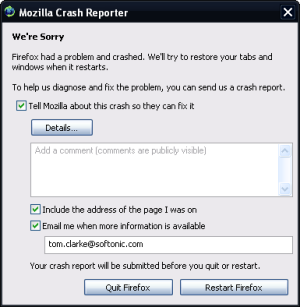 So the pomp and publicity is over. Firefox 3 was downloaded a gazillion times in 24 hours and was given a big gold medal by everyone (including Softonic). But just how good is Firefox 3.0? In my opinion, it deserves most of the praise it receives but it is still far from perfect. In fact, there are at least three things I really hate about Mozilla’s latest browser.

I haven’t used a program this prone to critical errors since Firefox 2.0 was released. In the last seven days, Firefox has crashed on me about 10 times. And like the very best program crashes, Fx 3’s problems seem impossible to predict. Sometimes, I’m editing a bookmark’s properties and Bang! Or maybe I used a search box on a frequently used and perfectly stable website and Boom! This happens on my Mac and my work PC but most specifically on the Mac, I also get frequent hangs due to other applications working. None of this happened during my extensive testing of the betas for Fx 3, so why now?

2   The memory hog that grew and grew

Everyone knows that the main problem people faced with Firefox 2 was that it was prone to gobbling up all your system resources like a fat, greedy, RAM-eating pig. We were given assurances by Mozilla and various reviewers that this problem had been fixed but… I still see Firefox using up a hell of a lot of memory for just two open tabs. Of course, extensions can be the root cause of this kind of problem but as far as I’m concerned, it’s mad to say “Well, as long as you don’t install any extensions, you should be fine”. If I can’t install extensions without Firefox turning into Mr. Creosote then I don’t want the option to install them.

Now this is a smaller problem and not exactly a critical flaw. But it’s annoying the hell out of me because there seems to be nothing I can do to fix it. If I’ve just started Firefox and I click my Gmail bookmark, I invariably have to log in. Every single time I start the browser. And it’s not just Google accounts that are plagued with this annoying problem. There are tons of sites where I now have to regularly log in when a week ago, I didn’t. And sometimes, when I enter my username and hit ‘Tab’ to get Firefox to autofill the password, nothing shows up. Even though the password’s stored in Firefox’s security interface (because that’s where I have to go to retrieve it).

These are just three of the issues that have been annoying me over during the early days of Firefox 3. It’s obviously nowhere near as bad as Internet Explorer yet but if Firefox 3.0.1 isn’t out soon, fixing all of these problems, I might have to go back to a release candidate or something.